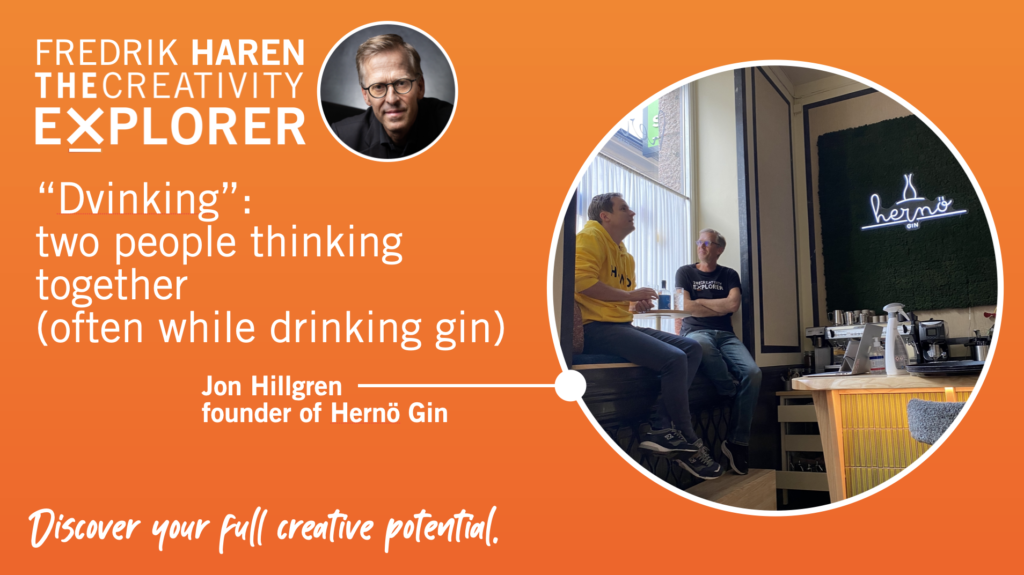 In celebration of Hernö Gin winning “Best Gin in the World” again (!) (they have won it every year since 2015!) I am posting this text from when I met with Jon Hillgren, founder of Hernö Gin last year.

I want to introduce you to a very useful word. It’s a word describing an important part of the creative process that we have all experienced, but never had a word for – until now.

If a group of people is sitting together to come up with new ideas we say that they are “brainstorming”.

If one person sits by himself/herself we say this person is “thinking”.

But there is a space in between. The time when just two people sit down in focused conversation for the purpose of together coming up with or developing some ideas.

It’s a word for one of the most valuable and most rewarding types of idea generation.

The word is derived from the Sanskrit word “dvi” (meaning “two”) and the English word “to think”.

If you have not heard of the word before you may be forgiven because I just co-created it with Jon Hillgren, founder of Hernö Gin. Hernö gin has been voted “Best Gin in the World” multiple times. I met with Jon in the Hernö Gin Bar (Yes, they have their own bar in Stockholm).

In the company of two glasses of Hernö Gin (of course) we talked about creativity, ideas, dreams and gin.

It was a conversation where we shared ideas, built upon each other’s ideas, got inspired by each other stories and created some new ideas as well. After a great hour or so I said to Jon: “There should be a word for what we have been doing – two people sitting and thinking together and discussing ideas while drinking gin.”

We both exploded with ideas and suggestions for what this new word should be and, in the end, landed in “dvinking”. (“dinking” has some negative connotations, and I personally love a word with Sanskrit roots.)

Example: “I really enjoyed dvinking about new business ideas with you.”

After interviewing 100,000’s people about when they get their best ideas I know that a huge percentage (around 20%) will reply “when I am talking to friends” and many will add “in a bar”.

Now we have a word for this very powerful and effective creativity activity.

The next time you dvink with a good friend (over a glass of gin, wine – or water) enjoy the moment and now know you have a word for what you are doing.